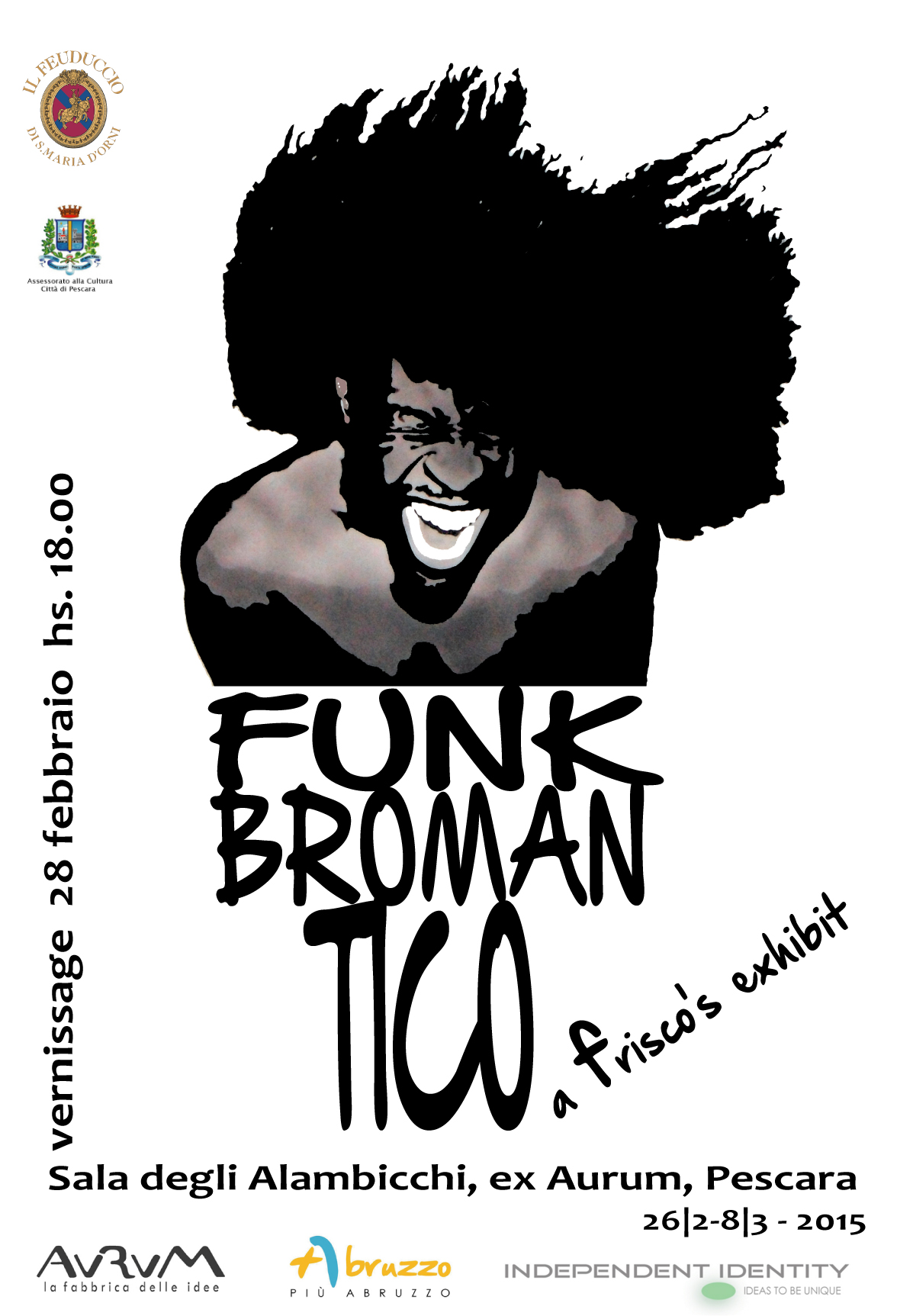 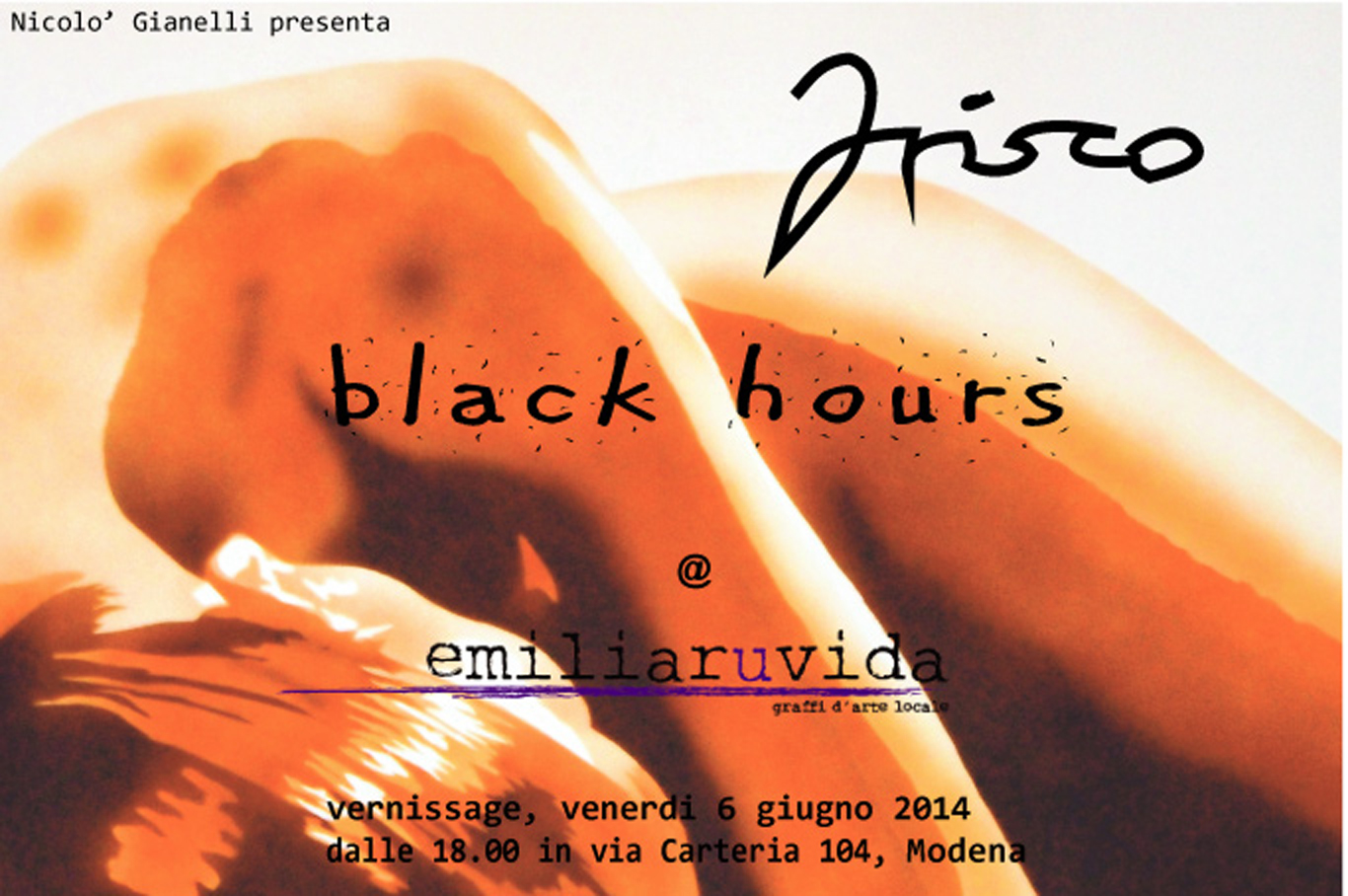 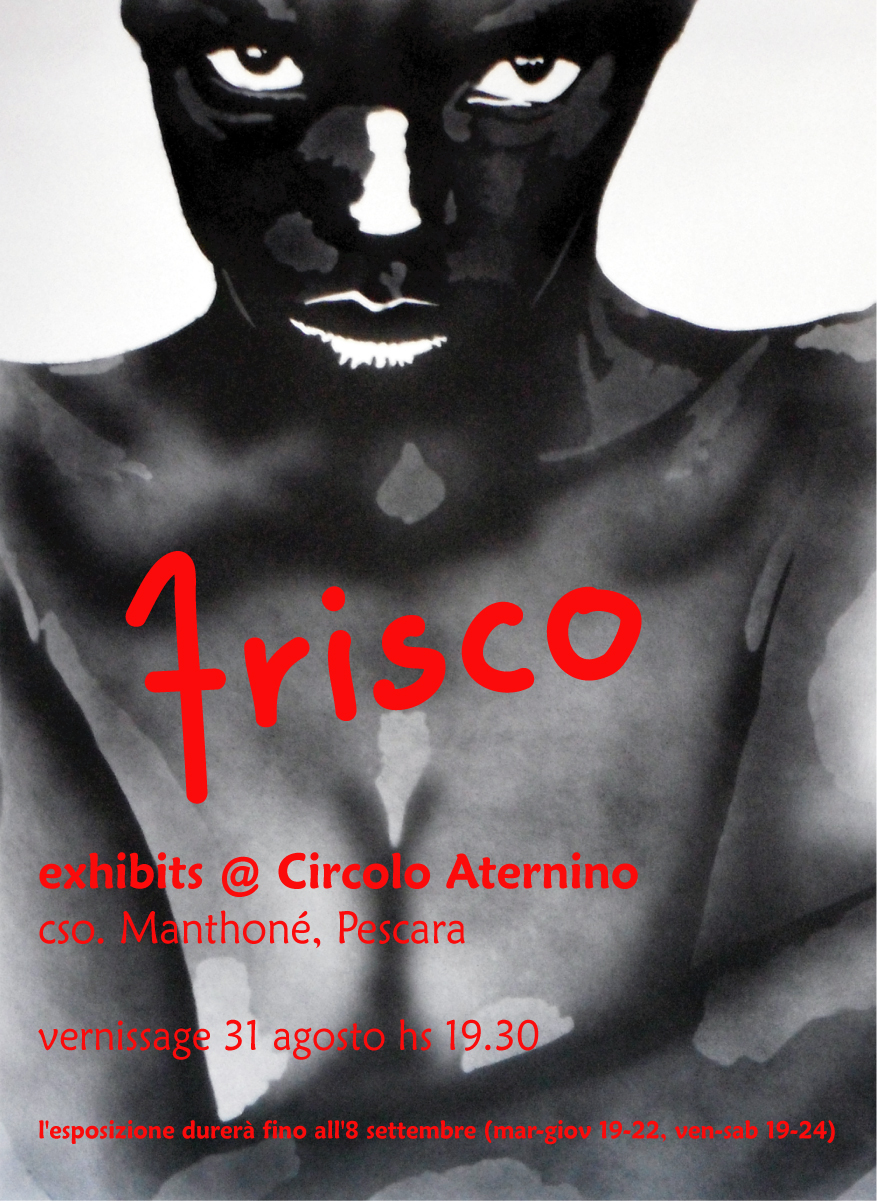 In its April 1983 issue, Domus visits two discothèques in Bologna, and describes their intricate set design: scenic atmospheres where one can dance, listen to music, meditate, indulge in your own thoughts or go off into solitary fantasies. In the times of spectacular mass entertainment, special attention is being paid to the places where individual entertainment is measured, and most of all to discothèques. People no longer go to the disco just to dance or to hear good music, but to abandon themselves to subtle pleasures, to savour sophisticated recreation and adventure. Next to the need for personal exhibitionism, this entertainment also has to satisfy the craving for surprise fillips, the desire for psychophysical relaxation and total well-being. People are now more demanding in their request for pleasure, which is why discothèques are being transformed into specialized recreation workshops. Video screens and films are not enough to fill the empty pauses and  to offset the dangerous drops in tension. Fanciful and eccentric interior furnishing and decoration at present seem to be becoming the focal points of Force and allurement in the new discos. Highly theatrical designs waft pleasure-seekers into a heady film-set atmosphere whilst ensuring a multiplicity of functions. You can dance,listen to music,  watch films and videotapes, but you can meditate, too, indulge in your own thoughts or go off into solitary fantasies.   A project for a model discothèque, as rare and ephemeral as an oneiric flash, was recently realised, for one brief evening, by a group of young artists, designers and musicians in Bologna. Their object was to create a few unrepeatable hours of total recreation inspired by a combined aesthetic idea: that of a hybrid and delightful union of art, decoration, design, music and drinks on the frivolous temporal pretext of pleasure. 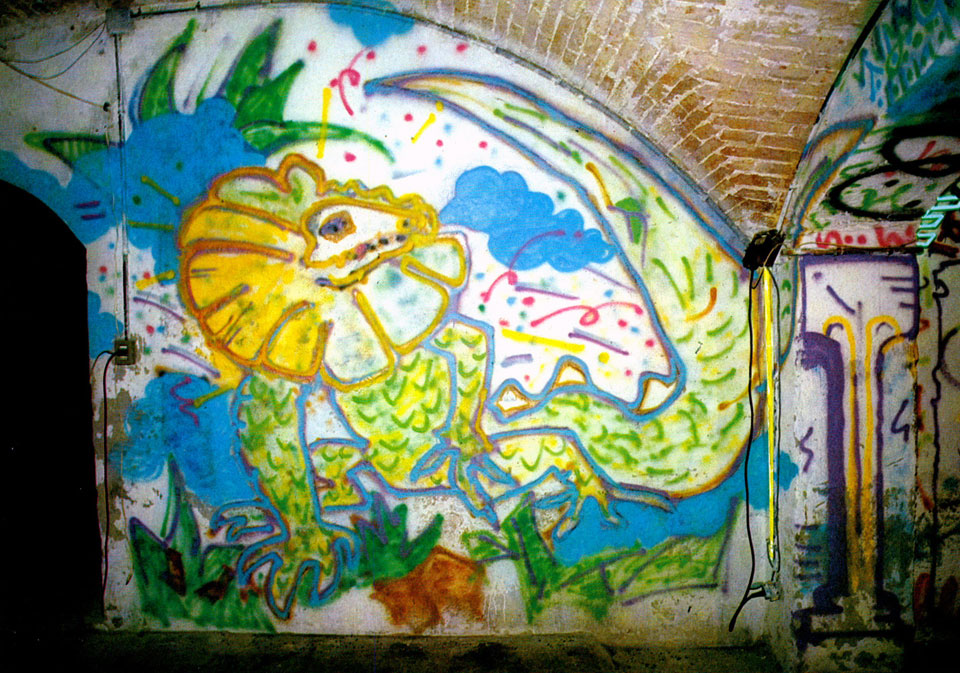 The site chosen for the project, born as Frontiera party, was the Segreto Pubblico di Borgo Panigale, in itself a relegated place, in Bologna's industrial outskirts and located in the basement of a disused slaughterhouse and cattle market. Literally underground, the Segreto Pubblico was originally an electricity power unit and refrigerator cell, but is now used for entertainment purposes. Comprising two rooms in a state of neglect and "archaeological" ruin, it was entirely transfigured by the mural decorations of three artists, Ivo Bonacorsi, Francesco Ciancabilla and Gino Gianuizzi. These were all done with spray paints in the graffiti style. In a neo-primitive technological jungle, dinosaurs jostled with electric wires, gliders' wings in lava flows, and filiform snakes surfacing like sexual tentacles between the winding crevices of furnishings.

The shaped neon lights and the mobile bar were installed by a group of designers, the Neons, who also did the cocktails. The disco-psychedelic-funky music was composed by the Etereodattili, a band specializing in improvisation and intuitive turning into the biological rhythms of the public on the dance floor. Next to this place of wild dancing was the entrance to a temple of meditation: a most intriguing domes grotto, painted all over with fluorescent colours (Egyptian-style decorations, a city in flames, a wheel of fortune); a musical sound track exploited the natural acoustic reverberations of this cave. A refuge for relaxation, solitude, fantastic ecstasy. 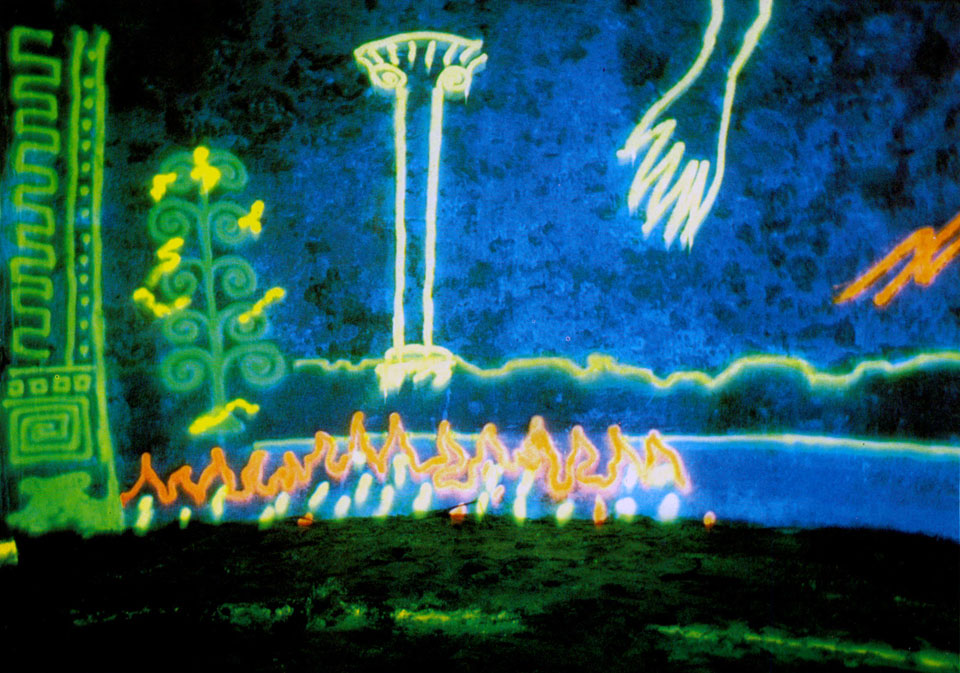 Another disco, the Kinki, again in Bologna, has adopted a highly strangelike décor, this time a permanent one, by another young designer, Fabrizio Passarella, with the collaboration of Giovanni Marcotto. Made with props bought at Cinecittà that once belonged to the sets of Cleopatra and other epic films about Roman times, the premises are in a luxuriant Pompeiian mood, with half-columns, capitals and triclinia providing tables, chairs and couches, and two large plastic statues of Antinoo and Apollo standing over the dance floor. Surmounted by a sky-ceiling, the floor has taken on the iconographic conformation of a swimming-pool, for the ablutions of late-imperial baths. 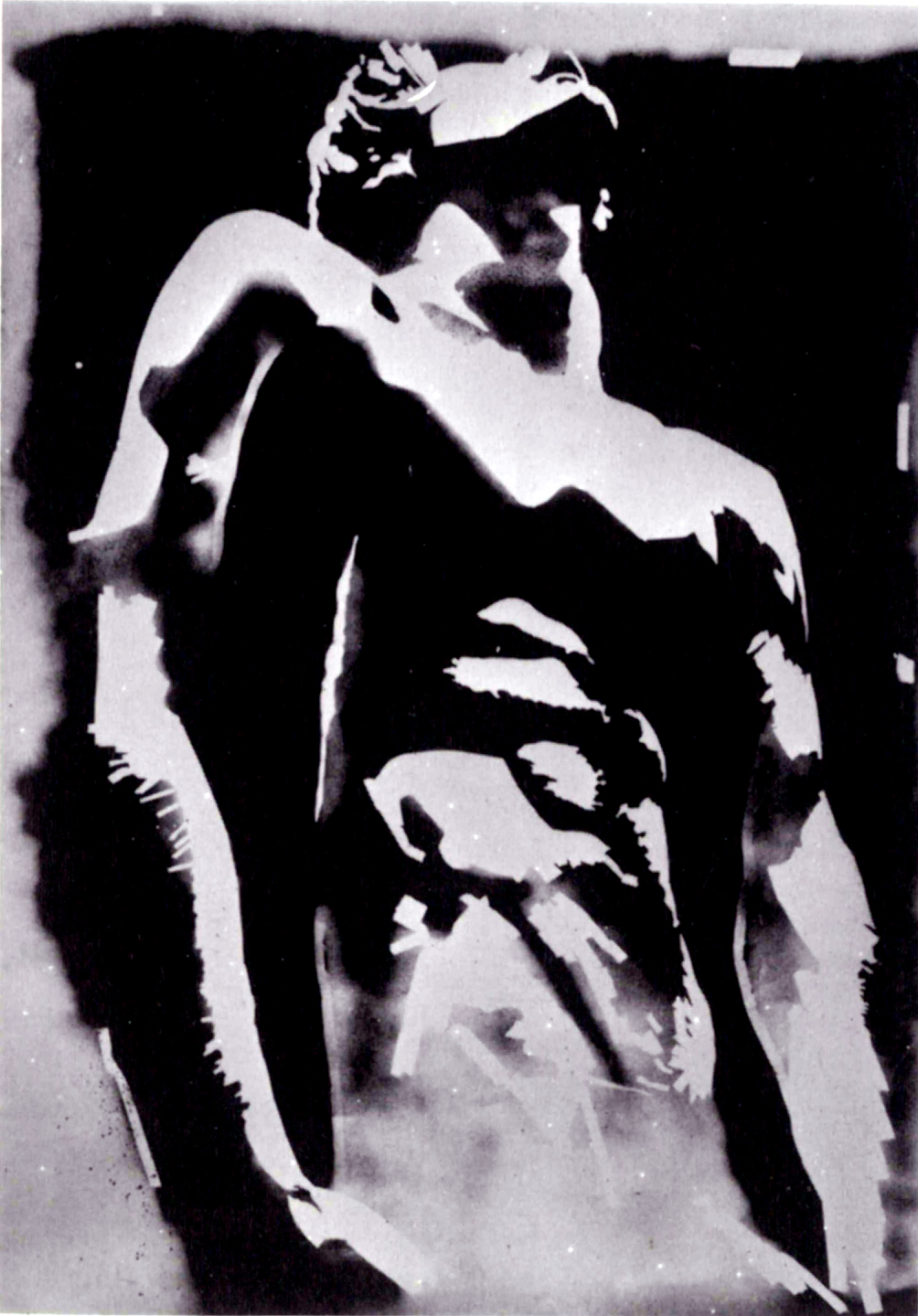